SavingCAST has been introduced to Cast-Designer solution. SavingCAST is used for determination of the optimum structure of metal charge components for melting foundry alloys, including multi-component, cast irons, steels, aluminum, copper and other alloys of the set chemical composition. The software also takes into account waste or increase of elements in the process of fusion. The build-in optimizer can help find the best balance of the cost and chemical composition accuracy to save material cost.

The free design function of gating system has been continuing improved and much powerful than before. The 3D gating system becomes very powerful and easy to use. Some innovation technologies of gating system make the system very flexible and powerful, like reverse engineering of existed gating, 3D slider and core projection for complex 3D runners.

More ever, Cast-Designer V7.2 can support parallel automatic optimization. This is a breakthrough technology which can speed up 5 to 10 times of the lead time of the optimization and no any special setup of the parallel model but only one switch button

Professor J. Zhang, Science Director of C3P Software, stated: “We have once again unveiled a new release which is testimony of our latest development endeavors. In line with the motto of this latest release, our users are invited to join us at more than ten roll-out events all over the world during which they will expand their knowledge and learn how to benefit most from Cast-Designer V7.2. This new software release enables our users to take further advantage of our continuous efforts to streamline and accelerate the entire engineering process of casting design and manufacturing process.” 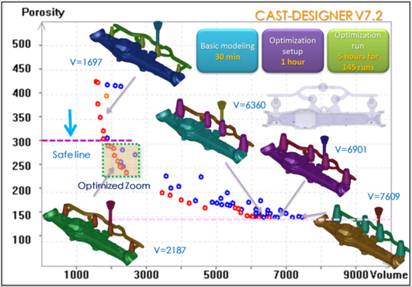 Cast-Designer optimization for the shrinkage porosity analysis and riser design